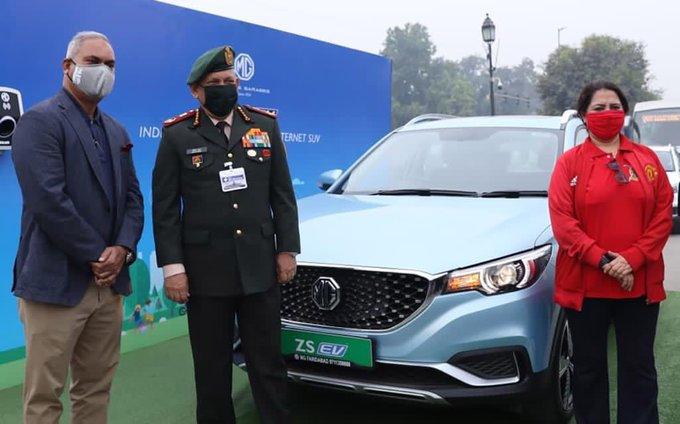 Chief of Defence Staff General Bipin Rawat is at the center of controversy along with MP Meenakshi Lekhi, NDMC chairperson, who was spotted at an MG Motor event. The picture, where Gen. Rawat is seen posing along with Lekhi with MG ZS EV in the backdrop, has gone viral on social media, drawing serious flak over the fact that MG Motor is owned by Chinese automotive giant SAIC Motor.

The viral photo of Gen. Rawat is seen in his uniform, which also drew criticism as many thought it to be a private event and the general’s appearance was inappropriate.

“Surprised to see the Chief of Defence Staff & former army chief go to an event organized MG Motors – a company owned by the Chinese Communist Party. This a day after more Chinese apps were banned,” one user wrote on Twitter.

“Since when does any Service Chief start going to events organized by Pvt Companies, in Uniform? And as correctly highlighted here, this is a Chinese owned company,” said another user.

India has been looking to ramp up its infrastructure for supporting EVs in the country and the first step is to install a network of charging stations for hassle-free commute. The government has kicked off its initiative to put more EVs on the road by 2020 with the NHforEV2020 Tech Trial Run, which was inaugurated on Wednesday.

Gen. Rawat, Lekhi along with other senior dignitaries from the government, including Faggan Singh Kulaste, Union Minister of State in the Ministry of Steel graced the event with their presence. It is the photo from this event that was taken out of context and MG Motor is merely a participant in the event rather than the organizer.

“We are proud to participate in the first-ever tech trial run from Delhi to Agra with the ZS EV. With its commendable range of 340 kilometers on a single charge, vehicles such as ZS EV are ideal for Delhi-Agra commutes. We would like to thank #NHforEV2020 for bringing together senior government leaders, EV players, and local supply chain stakeholders to nurture and build the EV ecosystem in India,” Rajeev Chaba, President and MD, MG Motor, said.