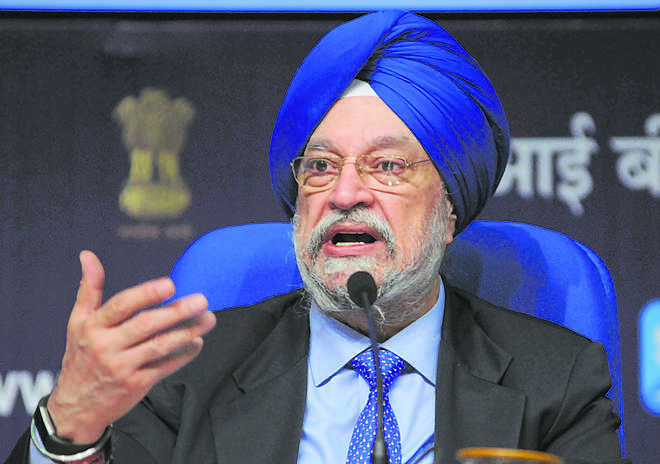 Civil Aviation Minister Hardeep Singh Puri on Monday expressed confidence that air travel would reach pre-COVID levels by the end of the year or early next year.

“We opened civil aviation on May 25, a good two months and two days after we have completely locked down…..with 30,000 passengers on a day. Two days or three days ago, I think just before Diwali, we carried 225,000 and with a scale at which we are opening up in a calibrated manner, we have already opened up 70 per cent capacity,” he said.

He said he has told his colleagues to look at 80 per cent.

“I am confident that by the end of the year, by December 31 or soon thereafter… means a week or two weeks thereafter, we will be back to pre-COVID levels,” he said.

But, reaching the pre-COVID levels requires that the existing safety protocols are strengthened further, he said.

“But, that requires, in turn, that we continue to maintain the existing safety protocols, we strengthen them and we are able to adapt…,” he added.

Speaking through video conference at ‘Deccan Dialogue’ organised by the Indian School of Business (ISB) here, Puri said he was committed to bringing aviation GDP back to India.

Observing that the value of traffic between India and the United States is roughly USD seven billion annually, he said the Indian carriers get a mere 17 per cent out of that traffic.

“How much do Indian carriers get out of that traffic. A mere 17 per cent. It is not as if the American carriers are getting the remaining 83 per cent. I am not going to say who is getting it. But, I see no reason why the Indian flagship carrier or the private sector carrier should not be earning more money flying passengers,” he said.

These are distorted business models because something went wrong, he lamented.

Civil aviation would get a boost in the next few years with the country getting 100 new airports and the fleet size reaching up to 2,000 from around 750 now, he said.

“Our fleet size today should be around 750.I know airlines when they come across a pandemic like this, they try to curtail the size of their fleet orders. But, I can say with seven per cent penetration which means out of every 100, only seven Indians fly and a 17 per cent rate of growth which we experienced pre-COVID at one time. We will move from 750, not to the 1,200 which everybody says, but to 2,000 aircraft. We will do it pretty quickly,” he said.

There was a massive opportunity for investors across the aviation ecosystem and aviation is a critical driver of economic growth across airports, airlines, ground- handling and others, he said.

Puri, who is also Union Minister for Housing and Urban Affairs, hoped that the country would be able to reposition itself as an economic player in the global supply chain before long.

The minister, who was optimistic about the economic aspects in the country, said there have been massive investments by global technology majors in India even during the unprecedented times of the pandemic. PTI