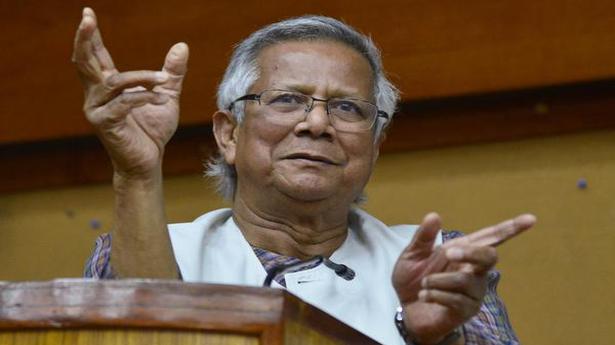 The Coronavirus [COVID-19] pandemic has given the world a chance to reflect and take ‘outrageously bold decisions’ to create a new order, Nobel laureate and founder of the Grameen Bank Muhammad Yunus said in a virtual conversation with former Congress president Rahul Gandhi on Friday.

Instead of being eager to “get back to where they were”, Mr. Yunus said the pandemic has given societies to think anew and create a world order where “there is no global warming, no wealth concentration and no unemployment”.

The conversation with the Nobel laureate is part of the dialogue series launched by Mr. Gandhi since outbreak in India. The Congress leader has interacted with experts from different fields and shared the videos online.

“COVID has given us a chance to reflect on how big, bold decisions can be taken. It has given us a window of thinking and we have a choice, whether we go to that terrible world which is going to destroy itself anyway or we go someplace else and build a new world where there will be no global warming, no wealth concentration, no unemployment. It is possible,” Mr. Yunus said.

Reflecting on the plight of the poor and migrant workers, Mr. Yunus, who revolutionised the world of micro-credit financing with the Grameen Bank, asserted that financial systems are designed in ways that do not recognise the poor.

“The financial system is designed in a very wrong way. So coronavirus, what it has done, is revealed the weaknesses of the society in a very ugly way that you can see it now… Economics doesn’t recognise these people. They call it informal sector. If we can finance them they will move up the ladder,” he said.

Agreeing with Mr. Yunus, Mr. Gandhi said the pandemic was an opportunity for individuals and societies to re-imagine and press the reset button.

Also Read | A year after he quit as Congress chief, Rahul continues to shape party’s stand on key issues

“Start with a blank page and start with a new imagination. Of course, you can’t make a jump like that in governance but at least the mind should go there and then the rest of the institutions and other things will follow,” Mr. Gandhi said.

The economist also criticised the Western economic model where the urban economy is the “Hub” and the rural economy is an “appendage” that supplies labour.

He also cited the example of Grameen Bank where banking of millions of dollars is done on the basis of trust and without any legal documents.

“How did we do that in Grameen Bank? People were shocked. I said we believe in their capacity. They believe in us. There is no collateral. Grameen Bank is the only bank in the world which is lawyer free. A bank built on trust where millions of dollars are given and come back with interest,” Mr. Yunus said, adding that micro credit to women also enhanced their entrepreneurial abilities.