ISL | Santana does it for HFC 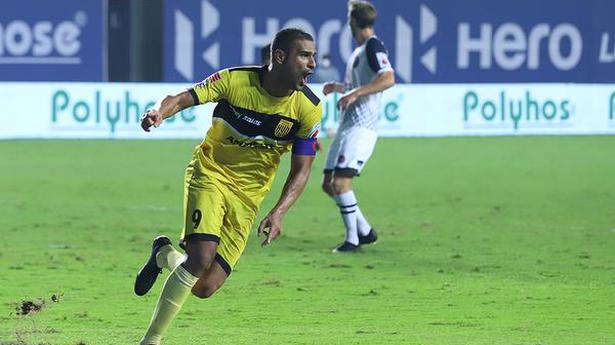 Profligacy in front of goal in the first half gave way to clinical finishing in the second as Hyderabad FC maintained its unbeaten run in the ISL with a 3-2 comeback win over SC East Bengal at the Tilak Maidan, Vasco, on Tuesday.

Skipper Aridane Santana, who missed a spot-kick, netted two goals in one minute and Halicharan Narzary added to the tally as Hyderabad scored thrice in the space of 12 minutes. Substitute Liston Colaco made a big impression with two assists.

Against the run of play, East Bengal broke the duck with what was its first shot. In the 26th minute, Matti Steinman made an unmarked run into the box from the left and squared the ball to Maghoma, who smashed it low past goalkeeper Subrata Pal.

Before half-time, East Bengal goalkeeper Debjit Majumder guessed Santana’s penalty right, but the match officials failed to spot him step out of the goalline when the shot was taken.

Manuel Marquez brought in winger Colaco to inject more attacking verve into the side, a move that paid rich dividends for Hyderabad.

After Liston won a free-kick at the edge of the box, Yasir’s speared-in-cross into the box took the faintest touch off Santana’s head to carry the ball away from Debjit and into the net in the 56th minute.

Yasir stole the ball from Maghoma in his own half and played in Liston, whose pass pierced through the East Bengal defence and found an unmarked Santana who did the rest. Liston then set up Narzary for a simple finish after a solo run into the box in the 68th minute.

East Bengal found a lifeline nine minutes from the end when Subrata couldn’t keep out Maghoma’s flicked header off an Anthony Pilkington free-kick.