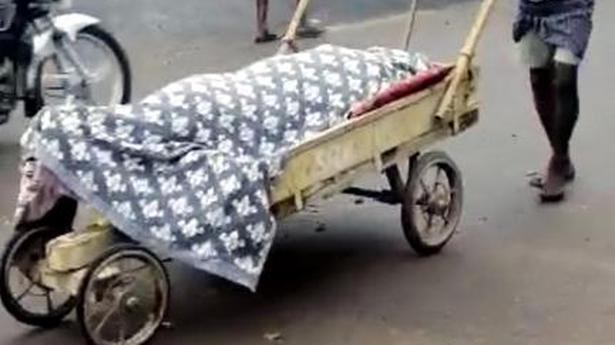 An aged woman, who died at her house in Gudalur, near here, had to be taken to the burial ground in a push cart as the ambulance failed to turn up on Saturday.

Health department officials said that five days ago, the aged lady complained of uneasiness and was admitted to the Primary Health Care Centre in Gudalur. After two days, she was discharged.

During her hospitalisation, samples were taken for COVID-19 test. The results, which came later revealed that she was positive and within 24 hours she passed away.

Under such circumstances, the relatives had sought the service of an ambulance but the vehicle failed to turn up even after 10 hours. The neighbours objected to the body being kept at home as they feared spread of the infection.

Thus, a push cart was hired and the body was taken to the burial ground.

Villagers said that three days ago, when a man complained of health issues, the ambulance had failed to come to his house in Koduvilarpatti. Finally, the COVID-19 positive patient had to be taken in an auto rickshaw, they added.

Health officials said that due to rise in COVID-19 patients there was shortage of ambulances.