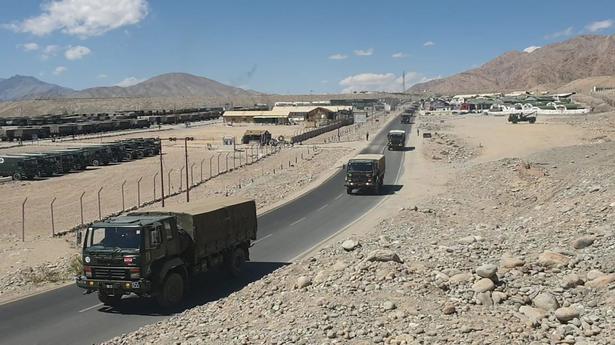 China on Wednesday blamed India for “violating” border agreements and said India bore responsibility for the recent tensions, a day after Defence Minister Rajnath Singh told Parliament that China had, by amassing troops along the Line of Actual Control (LAC) this summer, violated the 1993 and 1996 boundary agreements that have helped keep the peace along the border for years.

“The responsibility for the current situation does not lie with China,” Foreign Ministry spokesperson Wang Wenbin said at a press briefing, in response to a question on Mr. Singh’s statement.

Asked why China had not yet disengaged and withdrawn its troops to the status quo as of April, prior to its transgressions, Mr. Wang said: “The most urgent and important task is for the Indian side to immediately correct its wrong course of action, disengage on the ground as soon as possible, and take concrete actions to promote easing of the situation.”

“It is the Indian side that has violated the agreements, first trespassed, and first fired shots to threaten the safety of the Chinese border troops,” he said.

On the “five point consensus” reached on September 10 by the two Foreign Ministers in Moscow, he said China “hopes India will work with China to follow through on the agreement and other previously reached agreements, and put the border issue in an appropriate position in the bigger picture of China-India relations”.

On Wednesday, the Hong Kong-based South China Morning Post reported Chinese troops had last week “raised their combat readiness to the second-highest possible” level after the firing of warning shots on September 7 near the south bank of Pangong Lake.

The newspaper said “the alert was lowered after a meeting of the nations’ foreign ministers” in Moscow three days later.

The second-highest of four levels of readiness prompts for increased deployments of troops to forward areas and stepping up of training exercises. The highest threat level is only for armed conflict. The newspaper said this was the first time the threat level had been raised to two along the border since 1987, during a stand-off in Sumdorong Chu.

“Since the combat readiness level was raised, commanders, officers and soldiers have been working around the clock, carrying out extra training and drills,” a military source told the newspaper. “The PLA (People’s Liberation Army) mobilised more troops and weapons systems to the Line of Actual Control in preparation for the worst.”

While the alert level had now been lowered, the source told the paper “it could be reinstated if circumstances changed”. “The level can be decided by troops on the border, as happened before the 1987 skirmish, when it was adjusted several times,” the newspaper reported.

UP farmer beheaded for not sharing water