Ayodhya | Faith and dispute: the tale of a sacred town 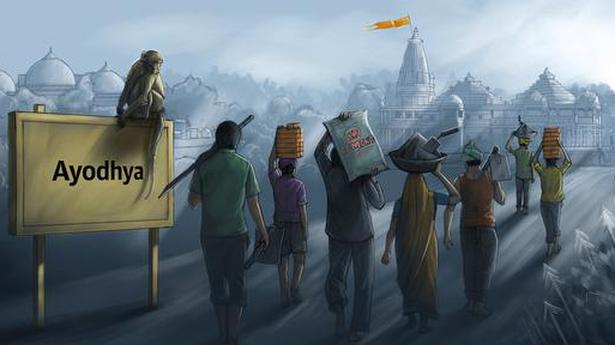 The ground-breaking ceremony of the Ram Mandir in Ayodhya on August 5, after a decades-long legal dispute that concluded last year, would not only set off its construction but also mark a new chapter in the history of the town. Located 130 km east of Lucknow, Uttar Pradesh’s capital, Ayodhya, a town of great religious significance, gained national prominence in the past few decades, coinciding with the Ramjanmabhoomi movement and its intertwined fortunes with the Bharatiya Janata Party (BJP).

Religious tourism economy in the town founded on the beliefs associated with the Ramayana has lagged behind that in other spiritually important cities in the State like Mathura, Prayagraj and Varanasi. The proposed Ram temple promises to alter all that as locals hope it would augur a new wave of development and livelihood opportunities, to cement the closure of an issue that has defined Ayodhya.

“Ayodhya’s importance, more than just a site of the dispute over the birth place of Lord Ram, was as a constant cipher in shaping post-independence politics,” said Prof. Pralay Kanungo, academic and author of RSS’s Tryst with Politics: From Hedgewar to Sudarshan. “There was an interesting interlude in 1980-81, when there was a talk of late Prime Minister Indira Gandhi moving towards Hindutva politics at least in the Hindi heartland,” he said. Plans to develop Ayodhya as a pilgrimage city, termed the Ram Ki Purhi project, was given the go-ahead by her in the early 1980s.

This trajectory was cut short due to Mrs. Gandhi’s untimely and violent death in 1984. Ayodhya itself was destined to be the epicentre of the two great ideas of the 1990s politics in India — Mandal and Mandir. And it was another political party altogether that would take the sleepy temple town and make it the fulcrum of Indian politics — the BJP.

“In the early 1980s, the newly formed BJP and its leadership came to the conclusion that to connect with people, it needed an emotional issue. Even when the erstwhile Jan Sangh participated in the anti-cow slaughter movement of 1967, the movement itself was led by the Congress, and there were no political dividends for the Jan Sangh,” said R. Balashankar, the former editor of Organiser, the RSS mouthpiece, and former national convenor of the BJP’s intellectual cell.

“The Ram Janmabhoomi movement was one such issue that had the potential and did in fact transform the BJP from a cadre-based party into one with mass support,” he said. The fate of Ayodhya was sealed in a little known town of Palampur in Himachal Pradesh, where, at a national executive meet in 1989, the BJP decided to politically back a demand by the Vishwa Hindu Parishad (VHP) to recognise the disputed site at Babri Masjid as Ram Janmabhoomi and support litigation by Hindu outfits to build a Ram Temple there.

“The movement was then piloted by ( L.K.) Advaniji through his rath yatra, and the expansion of the BJP’s connect through the figure of Lord Rama with Indians across the country, of all sampradayas (traditions) and castes,” said Mr. Balashankar. “The movement also helped the BJP negotiate the Mandal agitation and the far-reaching changes it made to Indian polity. Lord Rama is universally worshipped among a majority in the country, and helped transcend caste barriers in mobilising support,” he added. In fact, many leaders of the movement were from the Other Backward Communities (OBC) like Kalyan Singh and Uma Bharti, and laid the groundwork for the election of many BJP Chief Ministers with an OBC background.

Prof. Kanungo added that backing the VHP and the sants and heads of Hindu Mutts that are members of the VHP was also a turning point for the BJP. “The Congress had traditionally been dealing with the Mutts and religious institutions in a piece meal fashion, and many of them had supported the Congress through the first four decades of independence. The BJP’s support was important in pushing these institutions with their deep penetration of civil society across the hinterland in mass basing of the BJP.”

A metaphor for Hindutva

Ayodhya became the physical site and a metaphor for Hindutva politics, with “kar sevaks” converging from across the country for what turned out to be the death knell of the Babri Masjid.

The proposed Ram temple would be built at the site where the Babri Masjid stood till December 6, 1992. While the litigation process could be traced back to the 19th century, its major flashpoints came after independence, such as the surreptitious planting of idols inside the mosque in 1949, the court-ordered opening of the locks in 1986 for Hindu worshippers and the police firing on kar sevaks in 1990.

The twin towns of Ayodhya and Faizabad, covered in 15 minutes by road, offer glimpses of a shared culture, with the latter carrying remnants of the Nawabi rule through its architecture and as the erstwhile capital of Awadh. The Ayodhya town itself is dotted with several significant temples, including the Hanumangarhi, dedicated to Lord Hanuman. The town also houses 20-odd Muslim shrines, including one dedicated to Nuh (Noah), regarded as an apostle by many faiths. A local activist Vineet Maurya, who petitioned the Supreme Court claiming that excavations at the site were linked to Buddhist faith, has been at the forefront of promoting the town’s Buddhist heritage.

Ayodhya regularly rewarded the BJP. Since 1991, when the Ram Janmabhoomi movement was at its peak, barring an upset in 2012, when the Samajwadi Party won, Ayodhya has voted for a BJP MLA. In eight Lok Sabha polls during the same period, the BJP won five times.

After coming to power in U.P. in 2017, the BJP government has attempted to revamp the infrastructure in Ayodhya, building roads, setting up lights and repairing drainage. In 2017, Ayodhya picked its first Mayor Rishikesh Upadhyay after the Yogi Adityanath government elevated it to the status of a municipal corporation. The names of Faizabad district and divisions were changed to Ayodhya, thus increasing its territorial and political boundaries. The Deepotsav Mela, to be held in Ayodhya on Diwali, was also granted the status of a state fair.

Prof. Kanungo sees the town rivalling Varanasi, Haridwar and Rishikesh, looking at its politico-cultural space in India. “It won’t surprise me if the developments around this pilgrimage site become a space for debating the singular questions on Hinduism,” he says. For now, Ayodhya holds its breath.